Skip to content
07Mar 2012 by Women's Money No Comments 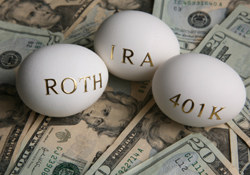 Are you afraid of your 401k? You’re not alone.
Back in the ‘90s, there was a terrible retirement problem looming. Pension plans were disappearing, and 401k plans were taking their place. But few people understood how these new vehicles worked (or wanted to sign up for them).

So companies began enrolling employees into retirement plans automatically—which solved one problem and created a bigger one:

Where do you invest all that cash?

Many employers put workers’ money into money market funds, with very low returns (if any). That’s not smart, when you’re trying to grow a nest egg big enough to retire on. About a decade ago, intrepid investment companies came up with a solution: a self-contained retirement portfolio that, like a TV dinner, would provide all the financial basics in one package.

Target date funds (TDFs) were designed so that average investors could park their money for 10, 20, or even 30 or 40 years, while fund managers did all the heavy lifting.

As the investor, you would choose a TDF timed to the year you want to retire—say, 2040—contribute regularly to the fund, and forget about it. Target date funds have all the ingredients pre-assembled: stocks, bonds, cash, etc. You come back at 65 and, voila!—a fully cooked retirement nest egg.

Initially, these funds seemed to be a great, hands-off solution for someone who otherwise wouldn’t be investing at all.

But… there’s a but. Despite a strong start, the idea didn’t go exactly as planned. In 2008, many of these funds suffered huge losses–including a few that were supposed to mature in 2010, leaving many pre-retirees in bad shape. And while TDFs have rebounded along with the economy, 2011 returns were actually worse than the major stock & bond indices.

Nonetheless, several companies have lowered fees and changed their formulas to improve the performance of these funds. So they are worth considering–especially for women.

Not only do women live an average of five years longer than men, women retire with a third less in their retirement accounts. Aside from lower overall earnings and more time out of the workforce, part of the problem may be fear of investing.

These are the women target-date funds are perfect for. TDFs aren’t a magic pill–all investments carry some risk, and a portfolio customized for your particular situation is the best portfolio, hands-down. But the most important thing to remember is that they’re 100% better than doing nothing to prepare for retirement.

If you’re interested in investing in a target-date fund, or if you’ve been automatically invested in one by your employer, follow these guidelines to protect yourself:

Get the Fund Your Freedom Toolkit for Free by Subscribing now!

Join thousands of other women on a journey to break from the grind and fund your freedom. When you subscribe today you’ll get instant access to the Women’s Money Fund Your Freedom Toolkit! Enter your name and email address to immediately start your journey towards financial freedom.